Home → Articles → What’s on ACSOM’s Stereo? The Imbeciles with ‘Decider’

What’s on ACSOM’s Stereo? The Imbeciles with ‘Decider’ 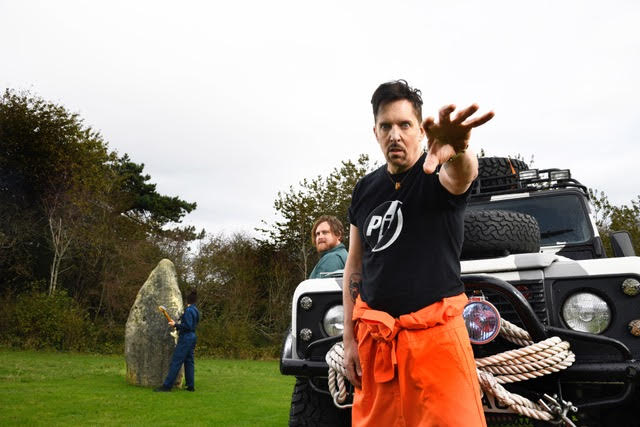 Ahead of the release of their self-titled debut album, out 27th March, THE IMBECILES present their new single ‘Decider’, out now.

Mesmerising, ghostly, seductive, urgent, poignant, ‘Decider’ is about the ultimate end game: death. This track draws you into its web and holds you there. There’s no escape. Is there anything after ‘the end’? If there is, will it bring happiness, or just more pain? And, are we to be judged by ‘The Decider’ when we get there?

The inspiration, if you can call it that, for the song comes from the band’s own recent experiences: “We’ve lost a few people recently that we were close to. It does tend to make you ponder the universe, and whether you get a second act,” says Butch Dante, guitarist.

Filmed on location in the Texas panhandle, the video will be the second of a triptych of films written by Butch, focused on the band’s main preoccupation: the fact that the world is ending and people should be kinder to each other while it does.

The band has gained strong support at radio from the likes of Lauren Laverne, Steve Lamacq, Marc Riley (“We love it! Really, really great.”), Tom Ravenscroft, and Nemone at BBC 6 Music, Benji B at BBC Radio 1, John Kennedy at Radio X, Amazing Radio, Artrocker Radio and the BBC’s Janice Long amongst others.

The Imbeciles are preparing for the release of their self-titled debut album, of 13 imploded songs which rarely last more than two minutes. Recorded on tape in eight deranged days on the Texan-Mexican border, it’s packed with stripped-down musical information and resonant with atmosphere.

A ghost of blues guitar haunts the dry post-punk clang of ‘D.I.E.’, with its overlapping, blurred lyrics. The stoner languor of ‘Ice Cream’ is chopped and fuzzed up till a sonic distress siren flares, and the track malfunctions and cuts out. Abrupt razor-edits and spectral moods abound. ‘Back Brain/Paranoia’ applies relentless pressure to the cranium. But ‘Decider’ is a despairing, Abba-quoting ballad. The defeatist conformity of much recent rock has been replaced by diverse wildness: a pungently dirty essence.

Listen to the latest episode of the award-winning A Celtic State of Mind with JAMES ENGLISH here:

“We’re trying not to adhere to the conventional wisdom of what a band should be, and who should be in it,” guitarist/lyricist Butch Dante believes. “Jads is a jazz-trained drummer who can roll off the beat in a Mitch Mitchell sort of way, the keyboardist comes from classical and jazz, and as the punk anchor with my lack of musical ability, I default to heavy power chords, based around fierce rock riffs. Those riffs, a strong drum-beat and aggressive bass are all very commercially viable. We might shift off into a hinterland of jazz-infused prog, but we bring it back. Because we want people to listen.”

The fragments of barked and mutilated lyrics aren’t singer-songwriter straight. But nor are they random. “We want people to think what’s going on is not right,” Butch continues. “That’s the theme of this album: you’re all fucked, we’re heading for a dystopian future. But before you fuck off, you could be nicer. The music sounds angry, but it’s driven by frustration at people being vile to each other, and inequality. The kindness that used to be part of our DNA has been expunged. Our leaders are embarrassed by it. But the only thing that will solve the world’s problems is ubiquitous kindness.” The album, though, avoids lectures. “The band-name’s designed to say we’re as foolish as anyone else.”

Two-inch tape gives analogue life to the album, capturing the space in which they recorded it together, on the lovingly prepared vinyl especially. Equal care has been given to the striking videos, crucial elements for a highly cinematic band. “D.I.E.” finds them as hollow-eyed, half-zombie astronauts, high-fiving on a suicide mission into the sun. “Three videos will form a triptych of death,” Butch laughs of their prevailing theme. “The next one will be filmed in Texas, and combines elements of The Seventh Seal, Planet Of The Apes and Them. Oh, and the Kung-Fu TV series.”

This diverse death-trip’s ambition is matched by gig venues. “We don’t tour where most people do,” Butch advises. “In America, biker bars and punk clubs. It’s been really good for us to see America’s underside.”

Butch Dante once met Hunter S. Thompson, still admiring his hero afterwards although it was “like talking to an otter on acid” he recalls, demonstrating the experience with a gabbling howl. Gonzo they may be, but The Imbeciles remain productively committed to their path. Clubs in London and New York are planned for like-minded souls: soirees for desperados. Fear and restraint will be left at the door.